Buffalo’s Anchor Bar is coming to Jackson Square in Hamilton 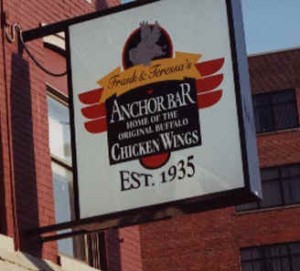 Construction is scheduled to start in the Fall on the 4600 square foot restaurant. The phenomenon created by Teressa Bellissimo in Buffalo, New York in 1964 is opening its Jackson Square location in early 2013. Proclaimed the ‘Best Wings in the World’, the Anchor Bar will open an upscale casual restaurant that, in addition to its signature wings, will serve a full complement of dishes from hand-crafted wood fired pizza, sandwiches, pasta, seafood chicken and a children’s menu, along with famous Cheese Cake Factory desserts. Owners Gary Reed and David Copperthwaite expect this first Canadian location to draw customers from around Southern Ontario who may already be familiar with the Anchor Bar from trips to Buffalo as well introducing the restaurant to soon-to-be loyal customers…….